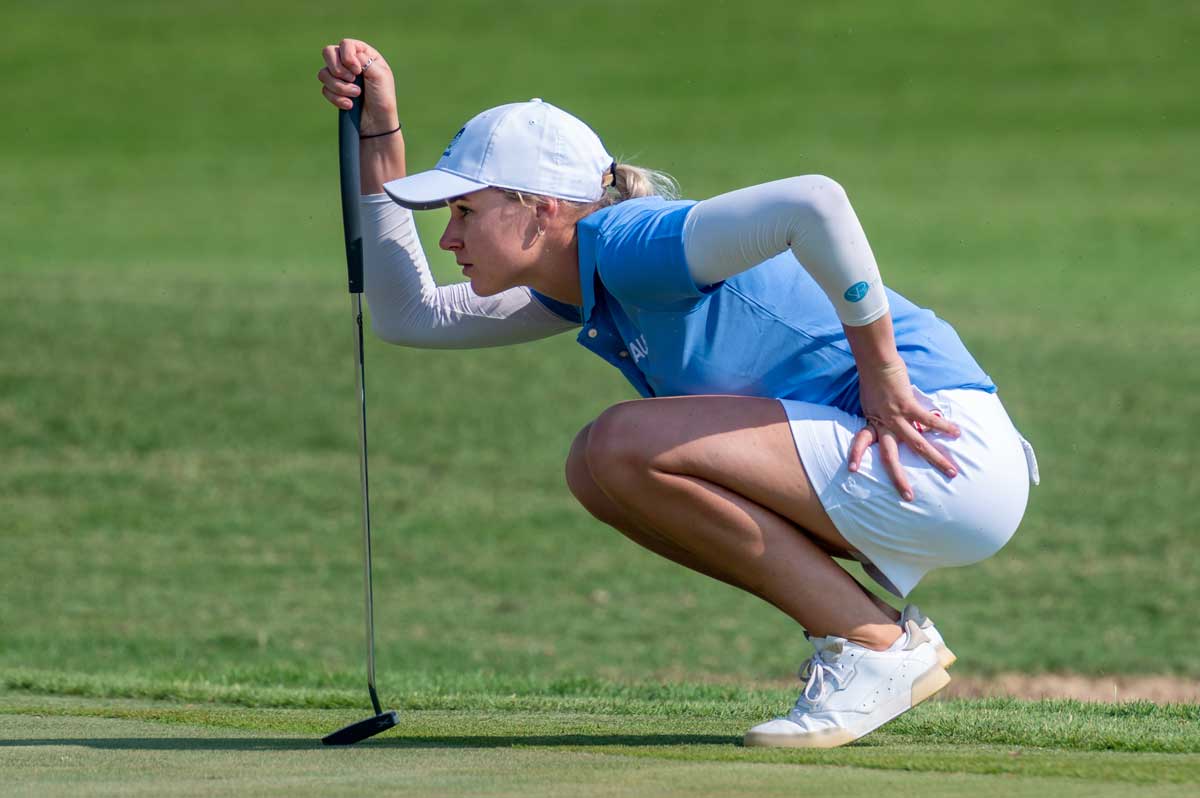 NSW’s Kelsey Bennett, from the Mollymook Golf Club on the South Coast, finds herself just two shots from the lead at the Women’s Amateur Asia Pacific Championship in Abu Dhabi.

Bennet who in 2021 has won the Tasmanian Open and NT Amateur Championships, kept the door open for possible success in this prestigious event as the championship enters the final 36 holes at the Abu Dhabi Golf Club, home of the Abu Dhabi event on the European Tour.

Bennett who plays much of her golf as a member of the St Michael’s Golf Club in Sydney’s Eastern Suburbs, where she is coached by John Serhan, closed with a final nine of 32 today for a round of 67 to add to her opening 69 and she tied for 2nd place and just two behind the halfway leader, Natthakrita Vongtaveelap of Thailand.

The 21-year-old nearly missed her tee time on day one after losing concentration during her pre-round putting preparation, perhaps contributing to an early double bogey on day one so she has done well to recover and put herself in contention.

“I was struggling on the front nine,” said Bennett referring to her slow start today. “Putting just didn’t feel quite right, but I got the hang of it on the back nine. I birdied 10, and it just sort of started me off. Hit a few close wedges, which were handy.

“This is my first major amateur event, so I haven’t really thought about it too much which is obviously a good thing. So, I’ll keep it that way.”

The Sunshine Coast’s Cassie Porter is also well in the mix after consecutive rounds of 69 have her at 6 under, four off the lead but tied for 5th place.

Porter who has been away from the game through back injury for over a year returned recently and won the Keperra Bowl event in Brisbane recently.

“Yeah, it’s been alright, pretty consistent,” said Porter. “It’s all about capitalizing on opportunities when they present themselves out there. I probably could have done a little bit better today, but you can’t say you’re unhappy with a 3-under.

Perth’s Maddison Hinson-Tolchard is tied for 45th after consecutive rounds of 73 and she along with Bennett and Porter are the only Australians to make the final 36 holes, albeit only just.

New Zealanders Belinda May and Caitlin Cotterill are also tied in 45th place and the only two of the five from their country to make it through.