You are here: Home1 / Uncategorized2 / Bucket-list Opportunity for Aussies at US Amateur

Imagine, if you will, the chance to play one of the USA’s most iconic golf courses as part of a subsidised trip to the US to play significant amateur events over the northern hemisphere summer.

Well tonight in the US when the U.S. Amateur Championship gets underway eight Australians and one New Zealander have that very opportunity when they tee it up at Pebble Beach Golf Links and Spyglass Hill Golf Club in the opening two rounds of stroke-play at the game’s most significant amateur event.

Playing Pebble Beach, in particular, is on the bucket list of most golfers although for many the cost alone makes it out of reach. It is, though, a public facility and if you can stump up with the US$500 or so you can play a course steeped in history and as American as ‘Apple Pie’.

All 312 competitors at this year’s US Amateur Championship get the chance to play Pebble Beach Links on at least one occasion this week but for those lucky enough to make it into the leading 64 who qualify for the match-play they face the very juicy prospect of playing the five-time US Open venue and the home for the 2019 US Open more often.

Some of golf’s most memorable moments have come at Pebble Beach Golf Links, including the 1 iron from Nicklaus at the par 3 17th in 1972 en-route to his victory over Bruce Crampton which hit the flagstick, the pitch in from left of the green on that same hole by Tom Watson in 1982 to beat Nicklaus and the simply stunning 15 shot win by Tiger Woods in 2000 to win his third major title and his first US Open.

For many in this week’s field their mere existence would have been but a figment in their parents imagination when many of those same events transpired but they will have been exposed to the stunning Pebble Beach from afar throughout their golfing lives to date and will be excited by the prospect of just playing the venue never mind that it is in such a significant event.

Barbieri, Dann and Windred claimed their places in the field via the demanding qualifying process while the others have earned the right to play via their standing in the World Amateur Rankings.

20 year old Minwoo Lee is competing in his third consecutive U.S. Amateur and his fifth USGA championship. He defeated Noah Goodwin, 2 and 1, in the 36-hole final to win the 2016 U.S. Junior Amateur.

Lee became the fourth international champion of the Junior Amateur and the first male Australian in 10 years to win a USGA title. His sister, Minjee, won the 2012 U.S. Girls’ Junior and owns four LPGA Tour victories. 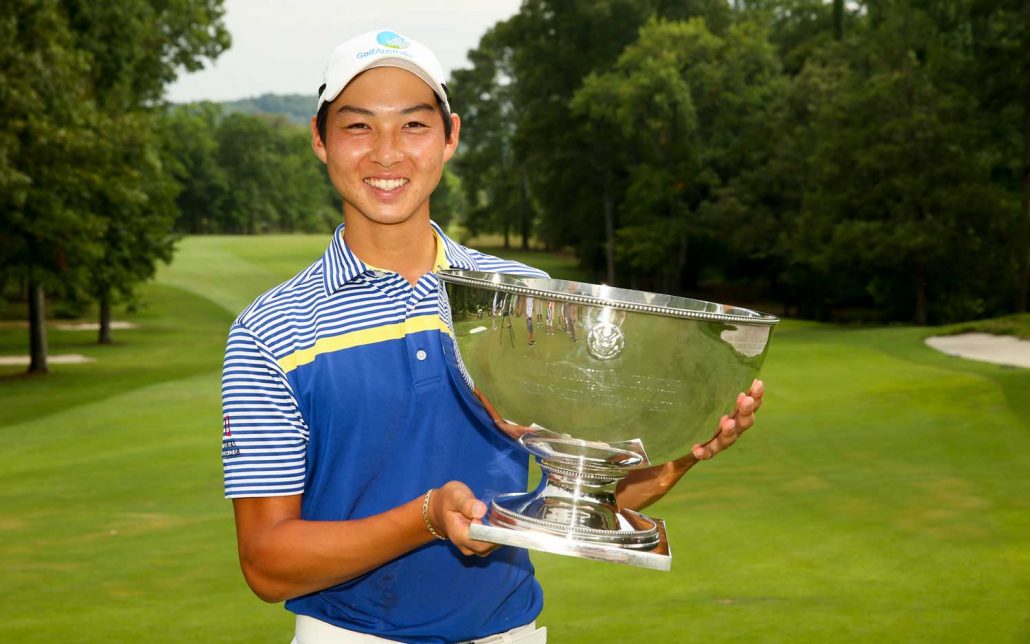 Minwoo Lee – with his US Junior trophy – courtesy of USGA

Victorian Micheluzzi was the runner-up to Keita Nakajima in this year’s Australian Amateur after defeating Shae Wools-Cobb in the semifinals.

He advanced to the quarterfinals of the 2018 Amateur Championship in Britain, losing to Conor Purcell, 3 and 2. Micheluzzi, who is competing in his first USGA championship, won the Australian Master of the Amateurs by five strokes at Royal Melbourne with a four-round total of 270. In 2017, he captured the Port Phillip Open Amateur and the Victoria Amateur (by 11 strokes) on Dec. 13.

23 year old Perry 23, of NSW but now based in Queensland, advanced to the Round of 32 in last year’s U.S. Amateur at The Riviera Country Club, his first USGA championship.

In 2017, he was the runner-up to Harry Ellis in The Amateur Championship, conducted by The R&A, losing in 38 holes, and tied for 10th in the European Amateur. He advanced to the Round of 32 in the Australian Amateur in both 2017 and 2018.

Last year Wools-Cobb of Australia, advanced to the Round of 16 in last year’s U.S. Amateur, his then first USGA championship. The Sunshine Coast (Queensland) golfer tied for sixth in the Porter Cup on July 21 and fired a second-round 65 in the process.

He reached the semi-finals of the 2018 Australian Amateur, losing to David Micheluzzi, and tied for 19th in the Australian Master of the Amateurs. In 2017, he tied for sixth in the Asia-Pacific Amateur, held at Royal Wellington in New Zealand.

Of much interest this week will be the appearance of Gary Nicklaus who of course is the son of the man with whom many people associate Pebble Beach, Jack.

Nicklaus Jnr returned to the amateur ranks in 2007 after many years as a professional and several of those playing the PGA Tour. His main claim to fame during that period was when runner-up to Phil Mickelson after a playoff at the Bell South Tournament near Atlanta.

The winner also elevates his status and profile in the world of golf to the extent that gaining invites to PGA Tour events becomes a lot easier as does the attraction of potential sponsors ahead of turning to the professional ranks.

Whether one of the nine Australasians in the field can match the deeds of Flangan, Lee or Luck in winning this most coveted title remains to be seen but the opportunity to play at such a treasured golfing venue alone makes the week one they will never forget.

Want to join the discussion?
Feel free to contribute!